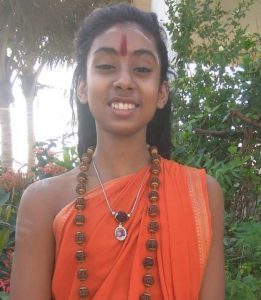 "I was six years old then and I am going to explain how I broke my hand. One day during my holidays, I went to my friend’s house in the aadheenam. I was sitting on the corner of a plastic chair, lost my balance and fell off with such force, that I broke my hand.

I went up to the third floor to our apartment, in the aadheenam and told my mom that my hand was disconnected. I was not crying. I was just focusing on the pain. 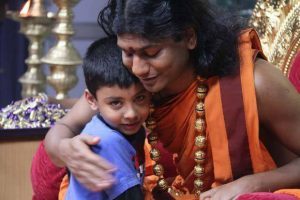 My dad and mom rushed me to Swamiji and told Him that I had broken my hand. Swamiji immediately asked an assistant to call an ambulance and take me to the hospital. In the hospital, they took me to the operation theater and I was in the hospital for four days and then came back home." 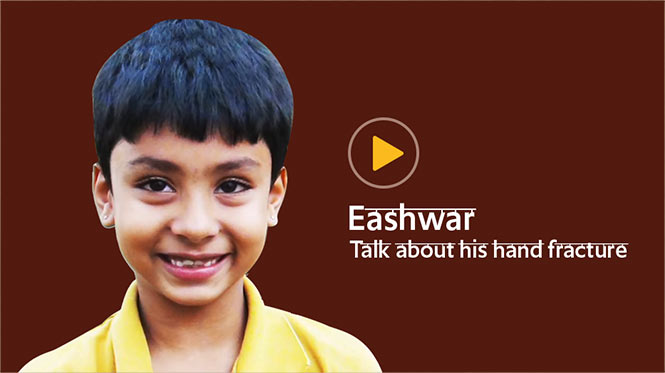 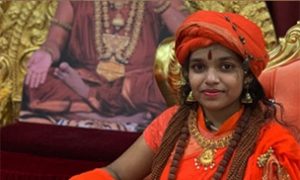 After Swamiji awakened my Third Eye, I am able to read comfortably, even when blindfolded.

The most surprising thing is, that I am able to read languages like Tamil and Gujarati, which I normally don’t know how to read! After these experiences, I feel that I have transformed a lot. 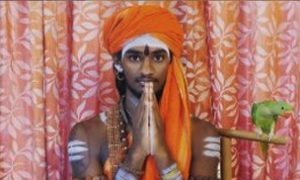 I just started expressing a new power. I am able to project, whatever I want, into others’ brains. Very recently, swamiji called us to train the Nithyananda Yogam and Adheenamites in the third eye shaktis., I started projecting some image or a word into each person’s brain. They immediately described and told me what I had projected to them.

I did this again and again, to different people and it came out to be right! A few days later, during the NDY for kids teacher training program , one of the participants came up to me and told me that he is trying to describe one of the balasanths to Ma Chitrabanu, who is in Kunnur in Ooty. I immediately told him that I can project it to her. Within a few seconds after I projected , Ma Chitrabhanu was able to understand the balasanth, that the program participant was trying to describe !!!!

It is an amazing experience, to be able to express these great powers, under the guidance of the Living Avatar. 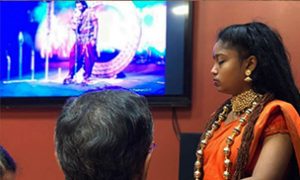 It was the time when Swamiji came to Gurukul and gave us the Third Eye Initiation for the first time.

After Swamiji left, we immediately started a manifesting powers session. In a few minutes, I started seeing letters and numbers and within 1 hour, I started solving puzzles and plating board games. Then the next day again, we had a manifesting power session. Within 1 1/2 hours, I started to read sentences and paragraphs. Soon enough within 3 days, I was demo ready, and now because of the initiations, that Swamiji has given me, I have been manifesting so many powers. II have done over 500 demos around the world.. 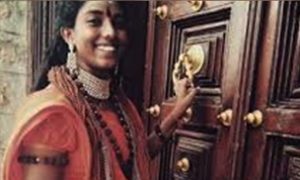 One day after satsang, when we balasanths were assembled, Swamijij came to us from Rajya Sabha and gave us a project of talking to plants and making them lose their thorns. We all got one rose plant and we each started speaking to the plant. Day by day, the rose plant started losing it’s thorns and started giving roses very differently . Some roses had heart shaped petals, some were like lotus, some were in different colors and even the leaves were in different shapes as well. This is what my rose gave. 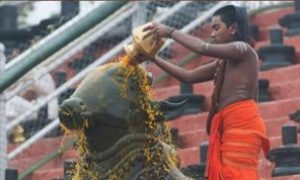 Swamiji initiated all the balasanths into 70 powers during kumbh mela . A few days ago, after I finished chanting, I wanted to play with the powers I was initiated into. I looked around and decided to increase the speed of the wind. As swamiji said I created a WILL and got into the space of advaitha, with the wind and commanded the wind to blow heavily. And immediately, without a second delay, it started going wild. It was blowing for sometime and then when I told it to calm down, It slowly calmed down and became normal. From this, what I understand, is that swamiji is showering us, with his compassion by giving these powers, for us to experience the space of advaitha with everything around us easily. 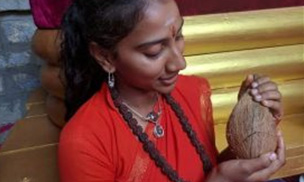 "using the powers of her third eye, cracked a coconut." 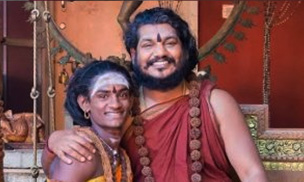 A Magnificient Revelation by Kalabhairava himself

Q -How does the footprint appear, inside the skull of the burnt Dalai Lama? Does any other master leave their body in the same way?

A. All the people who leave their body consciously, leave the body in the same way. If you shave your head I will show you my footprints on your head

"During an Akashic Readings session in Kodaikanal, the children of Kailasa’s Nithyananda Gurukul got an opportunity to ask their questions to Kalabhairava. I asked Kalabhairava, “I heard that footprints appeared on the Dalai Lama’s skull, showing the directions to the next Dalai Lama. What is the science and the reason behind this?’ Kalabhairava replied, ‘All enlightened beings and incarnations, leave their body in this way only. Shave your head, I will show you my footprints!’ When I shaved my head, I found that, indeed there was a clear mark of footprints on the crown of my head! There was no way anyone could have seen that other than Kalabhairava himself!"

– Sri Nithya Sundareshwarananda
Age 12 (at the time of the incident)